Playing with words (in 4+ languages) 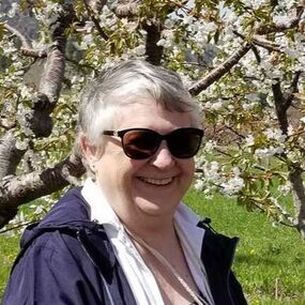 She works odd hours, hunches closely over her laptop, taking occasional short, quiet, shuffling walks around the office or the block to un-cramp her body – and, perhaps, her imagination.

At 81, Diane Jones is so far the oldest member at Cowork Penticton. A mother of five, grandmother of 11, and great grandmother of nine, she’s been tapping away at her computer as a resident desker for more than three years. A retired ESL teacher, she taught at Vancouver Community College for 30 years before retiring in 2001. But since, she’s been pursuing a dream – and perhaps getting printed revenge on her mother – by writing books.

“There’s been a buried writer in me for years,” says Diane, identifying herself as a hardcore grammarian. “My mother was a writer. She’d keep me home from school just to tell me a story she was working on.”

In addition to writing, Diane can speak four languages, including Russian, French and Spanish, and has studied many others, including Hebrew, Latin, Welsh, Spanish and – ahem – German (you might want to ask her about that one!). Fun facts: She can also read braille by eye (upside down and backwards) and count to 100 in Cantonese.

She honed her Russian-speaking skills in the 1970s while living in Vancouver. She and her family would simply walk up the gangplank of visiting Russian cargo ships at the harbour, striking up conversations with the crew. Before long, sailors would call her house when they were in town, often requesting a high-skilled match of chess with her son.

Diane and her husband, Frank, moved to Penticton in 2016, and almost immediately, she discovered Cowork Penticton, thanks to her daughter, Catherine, an editor, who was dropping in for hotdesking.

Diane started by writing a book titled The House of Secrets. She completed the novel and received encouraging feedback from an editor, but a corrupt USB file has temporarily sidelined the project.

Diane has also published numerous articles, including one short story, Fire, in an anthology titled Pilgrim’s Proof in the 2014 edition of Chicken Soup for the Soul – Touched by an Angel. She’s now writing her autobiography for her children and grandchildren, which she is writing in decades rather than chapters (now progressing into her 7th decade). She also has a ghost story in the works.

When asked what she considers her greatest success so far, Diane paused, smiled and replied: “I’ve got a terrific family, married 64 years, same guy.” She’s proud of her three decades spent teaching ESL to immigrants. She not only taught them English, but she helped them write their resumes and practice for interviews – essential steps for transitioning into their new lives in Canada.

As for Cowork, it’s a place where Diane can focus on her writing.

“If you write at home, you don’t get any writing done.” There are too many distractions, she says, like a retired husband. ”I work here so I won’t kill my husband,” she says with a laugh… proving coworking memberships can save lives.

A short Q and A with Diane:

Why Cowork?
“Coming to Cowork, I pay them, they give me a key, a desk, printer. I don’t need to buy the toner… I have 24/7 access. And I love having younger people around. There’s a real sense of family here.”

Come see me about …
#1: Grammar questions. “Unfortunately, they don’t teach it in schools anymore and it’s very sad because it makes it very difficult to learn another language. And people make ridiculous mistakes.”
Something you might not know about me
“I’m a Third Order Franciscan and had two years of seminary, so I have had half the training of a priest.” (Your go-to source for questions about religion.)

Special interests
Travelling. She often travels to Britain to visit relatives. She studied Russian in Moscow in July 1975 and has ventured throughout Europe as well as Mexico, Bermuda, Hong Kong (teaching ESL), 21 of American states (but not Alaska yet!), and all provinces & territories except Nunavut.